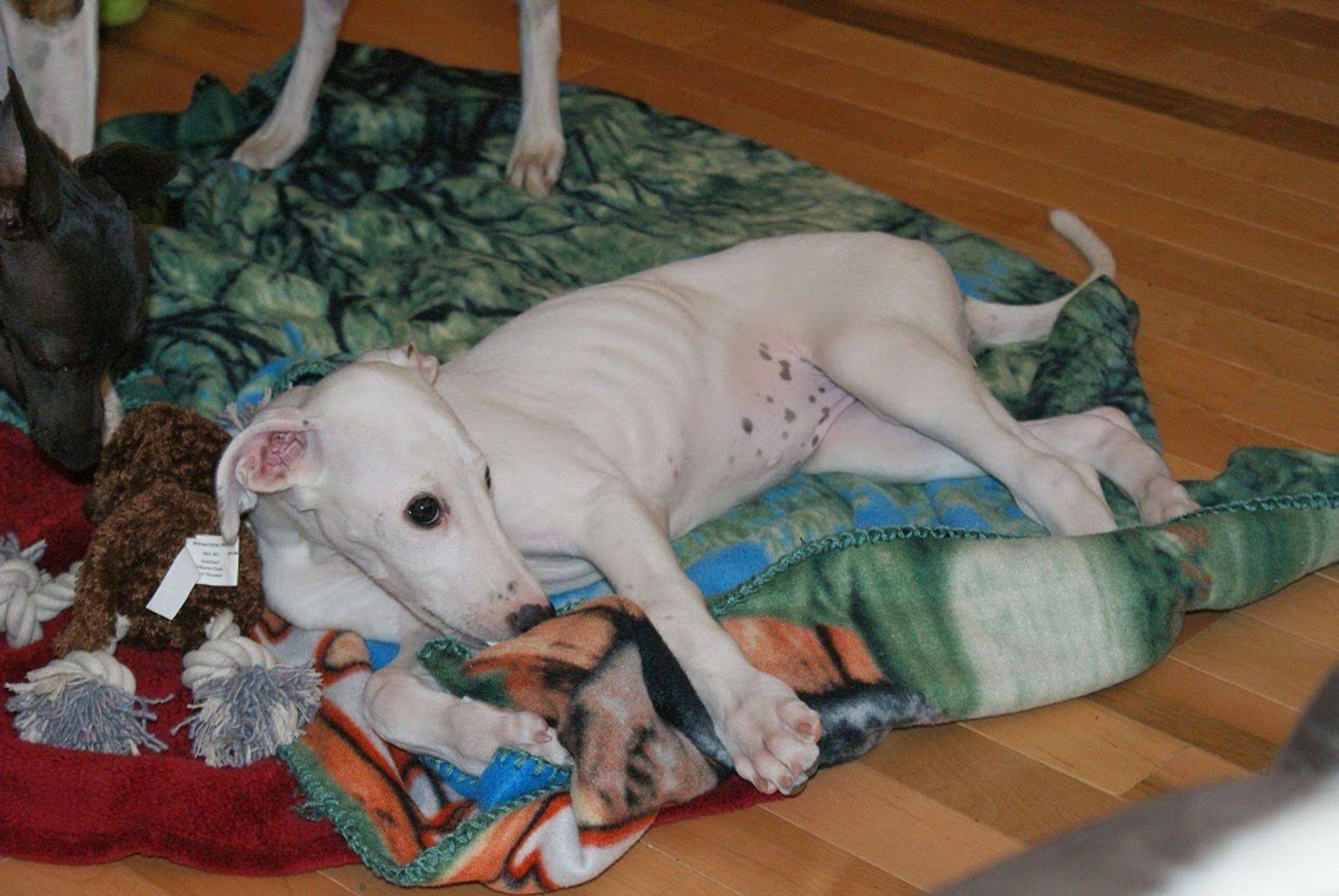 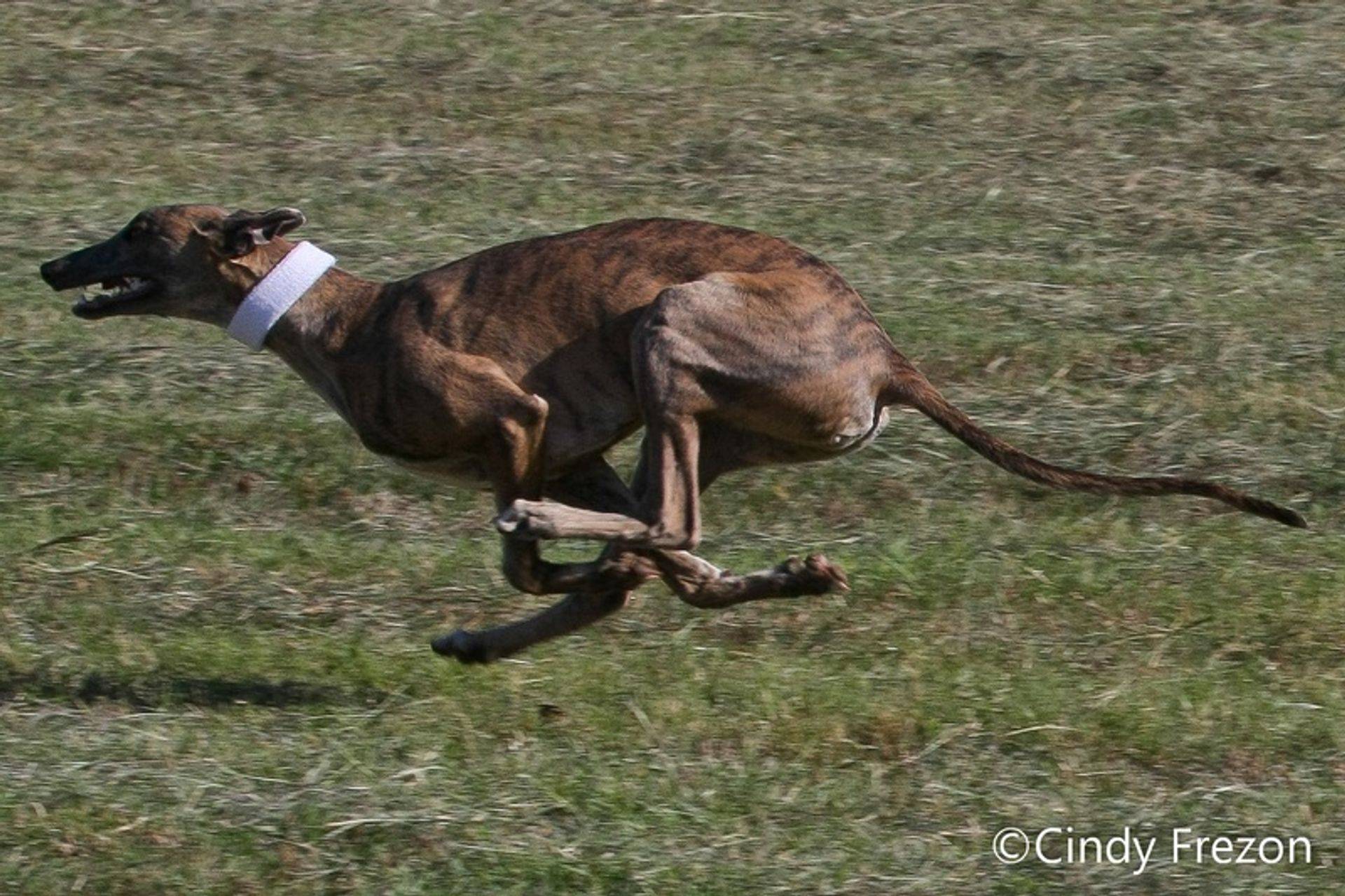 If the success of a breeding program can be measured by the success of its sires and the offspring of those sires, WINDROCK LLC surely have attained the lofty heights of the pinnacle of success as few other breeders have!

However, one must realize that a sire is only half of the equation and most of the credit is due to the individuals  who brought their exceptional lady greyhounds to our studs.  That said, please allow us the privilege to introduce the male Greyhounds who through their collective contributions and those of their descendents, helped to firmly establish the  WINDROCK  name in Greyhound history.

As Colin and I had the foresight to collect and freeze semen from these exceptional sires, we can now offer to breeders the rare  opportunity to breed to the Greyhounds listed below and therefore acquire bloodlines that otherwise would not be available. Many of the sires  we have frozen semen on lived years ago and now are deceased.

All of the Greyhounds listed here have had health testing performed.  Not all the results are available on line, but copies will be provided to interested parties upon request.  We encourage breeders to perform health testing on females before mating them.  We recommend at the minimum, testing for cardiac, neuropathy and CERF.

The All Time Top Champion Greyhound Sire In History~

Bubba was  bred by Jack & Maggie Mitchell under the guidance of Joan Dalebout, and acquired by at four months of age by Kim and Colin Fritzler of WINDROCK  Inc.

Kim remembers that even as a puppy, Bubba was fiercely independent, headstrong and very stubborn. He was anything but easy to work with.  The Mitchel's admitted to spoiling and coddling their favorite pup. The Fritzler's recognized this and quickly realized they had a beautiful, but rebellious young dog that would require special handling. With the wisdom born of years of experience, they slowly and carefully set about the task of revealing the diamond in the rough. This would take an inordinate amount of time, training and patience. Kim and Colin were not deterred, they saw in Bubba the promise of future greatness and they believed in him--and in each other.

When the time came, Bubba, expertly conditioned, trained and shown by Kim Fritzler was presented to the dog show fancy and the rest is Greyhound History!  Possessing an indescribable charisma and electrifying presence  all wrapped up in a male greyhound's sinewy grace, Bubba was quickly recognized and awarded by the top dog show judges of the day! The incomparable First Lady Of Dogs, Mrs. Anne Rogers Clark gave the white and red rising star his first Best In Show! In an amazing two years, totally owner-handled by Kim Fritzler and restrictively shown, highlights of Bubba's phenomenal accomplishments include:

7 Best In Shows, including two back to back BIS wins

6 SBIS, including back to back GCA Eastern wins.

Undefeated with his get in Stud Dog classes

Bubba is the all time top Greyhound champion sire and  he is the all time top owner-handled greyhound dog BIS & SBIS winner in North America! He is one of the breed's top 5 BIS winning males. He has sired more BIS & SBIS winners than any other Greyhound and his get include many top ranked winners. He has sired 53 AKC Champions to date, not including Canadian or Fch titlists.  His lovely daughter, BIS/SBIS Ch Huzzah Molly Malone is one of the top winning Greyhounds ever with 13 BIS wins. Our own BIS/SBIS Ch Greystone's Barcelona was the #1 Greyhound Dog in 2001 & 2002.

From a breed health standpoint, Bubba's star as a significant sire really shines! Bubba himself was thoroughly health screened, OFA/CERF, thyroid and heart functions, and we required that females mated to him have  OFA/CERF clearances. To the best of our knowledge, out of his 113 children, there have been NO reported cases of ANY eye problems , NO hip or elbow dysplasia, and the incidence of GDV (bloat/torsion)  affecting his get is astounding low--less than 7%.  The breed average is at 19%!  As a whole, Bubba's offspring have had very few health aliments.

WINDROCK is well known for our line of winning show and performance greyhounds and most of our dogs are descended from this amazing greyhound.

We have one vial of semen from this exceptional sire available for sale.  Interested parties please email us at windrock@bresnan.net 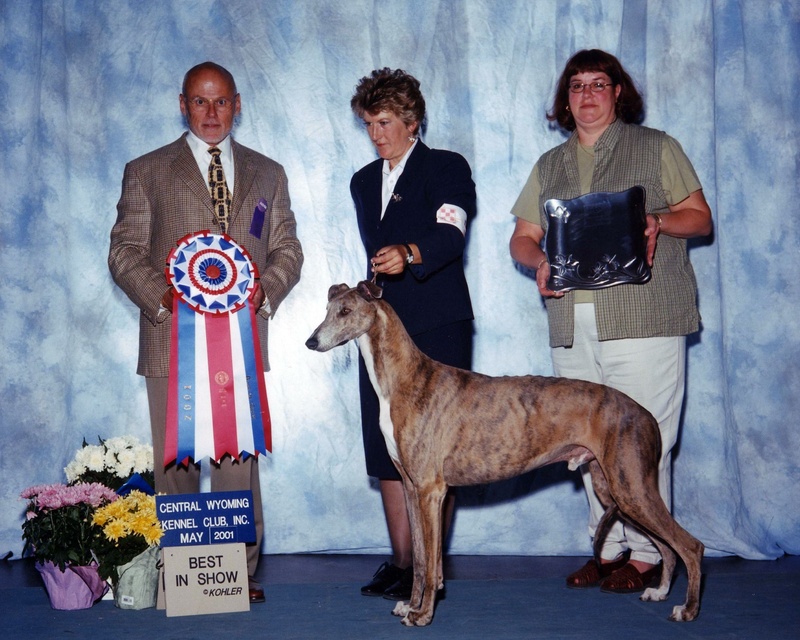 Barc was acquired by WINDROCK as a stud fee puppy from his breeders, Steve & Sharon Heward. A son of the flashy top winning Ch Shazam's The Journey Begins JC, Barc was not at all reminiscent of his father.  He was a compactly built smaller male of blue fawn brindle coloring.  He had well muscled quarters and excellent ribspring and was very sound. Not overdone in any way, Barc was easily overlooked--until he moved.  Then you couldn't take your eyes off of him!.  He was a very clean, balanced mover with a wonderful flowing gait.

Handled by Kim, Barc finished his AKC championship very quickly with multiple BOB wins and group placements from the classes.  Always owner-handled and with very limited showing, he won multiple BIS and SBIS and was even High In Trial at the 2004 GCA Eastern Specialty, where his children won SBIS, WB, RWB, and another won the major in lure coursing.

Some of the high points from his brief career:

Sire of the WINDROCK bred, "ABBA" litter, Barc and Ch Sobers Aquatica SC, gave us multiple BIS/SBIS winners, Breed Champions, Field Champions and Dual Champions along with multiple #1 winners in both the ring and on the field.

Barc was as good a show dog as I have ever shown.  He was a "push button thing." He would self stack, respond instantly to the slightest gestures and always gave his best.  He loved to show and would really turn it on when it counted. He was as sound as they come and would gait and stop true every time.

Barc was co-owned by our dear friend Marti Bradford.

We have a good supply of frozen semen to sell to interested parties.  Please email us at windrock@bresnan.net 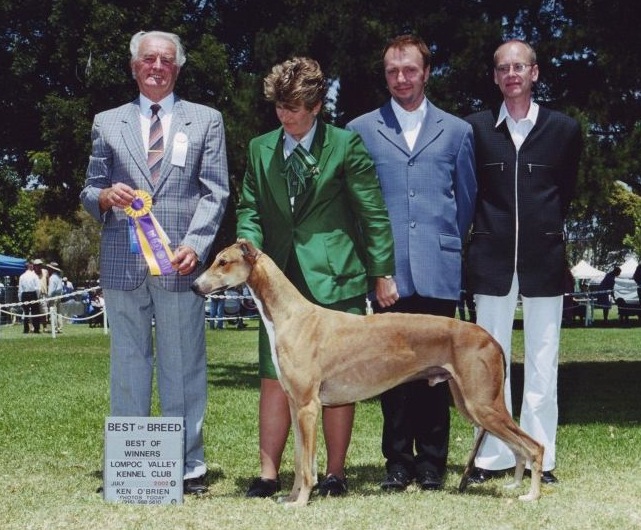 MBIS/SBIS/HIT Ch Greystone's Barcelona CGC  x  Ch Sobers Aquatica
Click this link for Pedigree:   Fernando's Pedigree
CERF/Hips "A" rated in Finland, Neuropathy Free
Fernando is one of the pups from the sensational "ABBA" litter bred by WINDROCK. He is a littermate to our #1 ranked MBIF DC Windrock Mamma Mia LCX Fch, " Naughty", DC Windrock I've Got A Secret SC, "Whisper", RBIS Int Ch Windrock Angeleyes of Skyings, DC Windrock Dancing Queen SC Fch, "Karmen"and Multiple Group placing Ch Windrock Cassandra SC, "Cassie".
This brilliant red son of our #1 ranked Ch Greystone's Barcelona and out of the lovely Ch Sobers Storia daughter-Ch Sober Aquatica SC; finished his AKC Championship very easily earning multiple group placements from the classes, his was RWD at the GCA National, and was BOB over numerous top ranked specials the following day. He went on to  a huge Group 2 win at Lompoc KC the same day and finished his Championship.  Doing so, he defeated some of the very best Hounds in the country.
He was exported to Finland soon after finishing his AKC Championship and has enjoyed a successful show and stud career in Scandinavia.  We had the foresight to store semen before his departure as we thought he would prove to be a successful sire.  It wasn't long before our predictions proved prophetic. 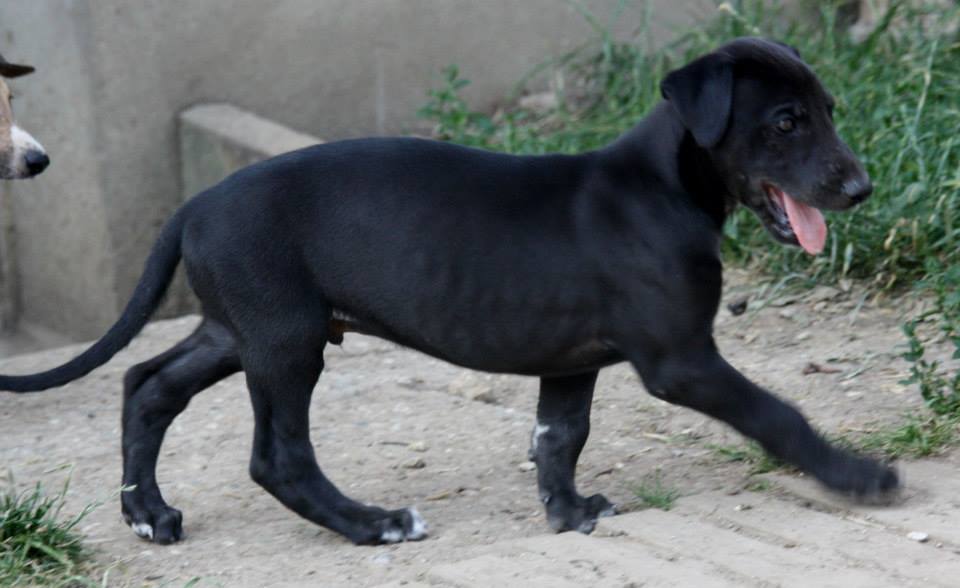 Frozen semen puppy sired by Fernando and bred by Francine Belgherbi
Ad Honores I Will Reign At Windrock
call name Icon
Imported by WINDROCK to the US!
Group Winning Ch Martigra's Cupid's Beau 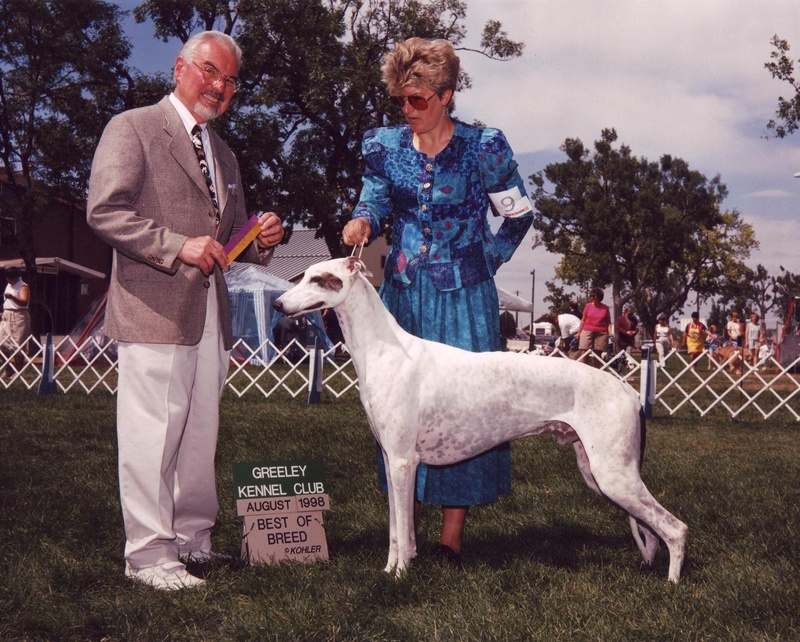 Beau was bred by our good friend Marti Bradford.  She raised him and showed him to his Championship and shown as a Special by her, this handsome showman racked up numerous BOB wins and group placements.  He also was a Group Winner in tough Texas competition.  His wins become more significant when one takes into account that Beau was often in direct competition with his 3/4 brother, the heavily promoted and professionally handled BIS/SBIS Ch Gerico's Chasing The Wind, a #1 ranked Greyhound that Marti also co-bred.  While "Chase" may have enjoyed a stellar show career,  many breeders would agree that of the two, Beau surpassed Chase in the whelping box.

Beau was the sire of 25 Champion get, including SBIS and Group winners.  Most of his offspring were owner-handled to their wins.  He also sired some excellent coursing and versatility greyhounds.

Beau came to live at  WINDROCK for a while, and I remember often stopping my work just to admire him standing there out in one of our grass paddocks.  His conformation and elegant lines made him a magnificent sight and he had the well defined muscling and proper Greyhound shape, especially strong in the underline.  He was a moderately sized greyhound of great virtue and we are thankful to have had him in our lives --and hearts.

I remember Beau fondly.  He was an easy keeper and good traveler, a tremendous showman,  and very happy and animated in the ring.  He was unlucky in his timing to come to Colorado as our powerful youngster, Greystone's Barcelona was just coming out and most of the all-arounder judges did favor young "Barc"  as he was cleaner coming and going .

All dogs have their faults and Beau was a bit wide in the rear.  Bred to bitches that were clean in their movements,  he did not often pass this shortcoming on.

We thought enough of him to have semen collected and we intend to use him in the near future.

We do have some frozen semen to sell to interested parties--contact us at windrock@bresnan.net 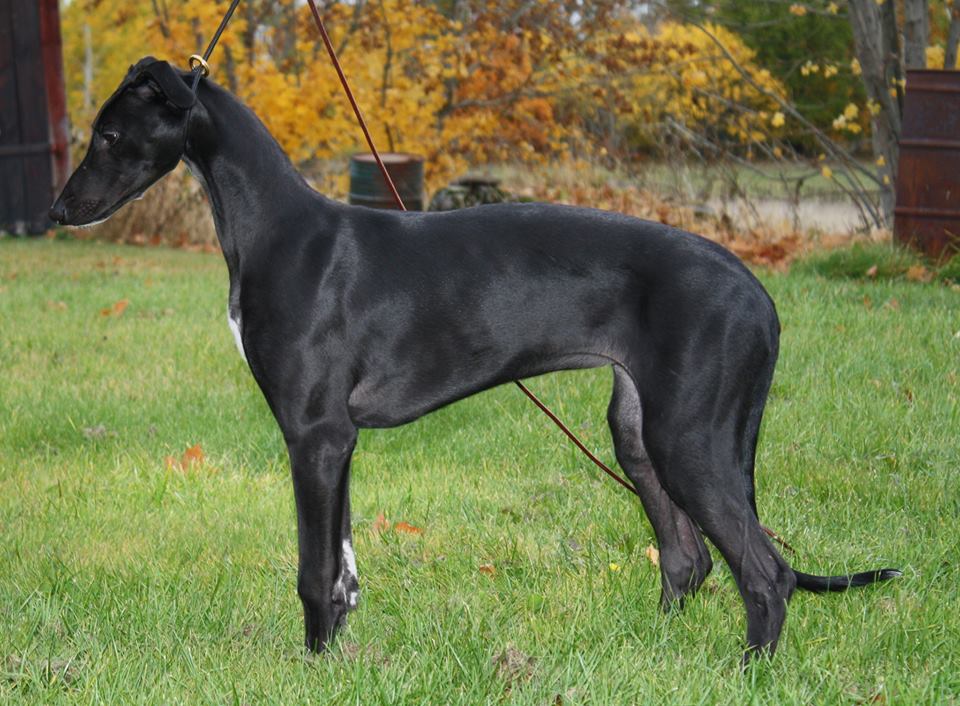 Ayden made very short work of his AKC Championship.  His three GCA Specialty showings were brilliant. To the best of our knowledge, no other Greyhound has attained an AKC Championship by winning three straight Greyhound Club Of America specialties--and two of them were back to back National wins.

With this third specialty triumph he was crowned a New AKC Champion!!!!  As far as we can tell, he is the only Greyhound in GCA history to accomplish this.

He has proven to be a worthy coursing dog and has attained both his AKC and ASFA lure coursing titles.  At the 2008 GCA National, he not only won WD,BOW for 5 pts to finish his AKC Championship with 3 specialty wins, he also won a 5 point major in lure coursing later that afternoon!

Ayden has proven a successful sire and we are pleased with the health and success of his kids.  The few get that have made it to the shows have done very well.  He is the sire of multiple Ch, Dual Ch, Grand Ch,  Group winning and specialty winning offspring.  His commanding son, Ch Windrock Wild Sensation SC  is the only champion to be specialed to date, and we expect this fine dog to live up to his name.  In limited outs he is a multiple group winner and placer.  Watch for him in 2012.

But most importantly, Ayden is the best of companions and a perfect gentleman in the house. He is totally trustworthy with children, small animals and other male dogs. 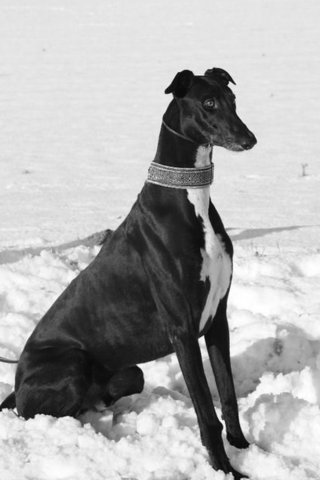 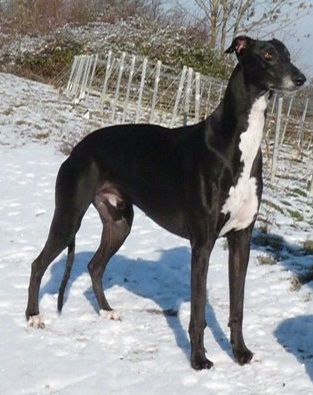 "Denetorn" , a fabulous moving black stallion of a greyhound has always been owner handled and his show ring accolades are impressive.  He is BIS and RBIS winner, Lux. Ch, 2 Times RCAC at National French Greyhound Specialty 2009 - 2011. RCAC at French National Championship (2011) AND CAC Winner at the 2012 French Ch, now FRENCH CHAMPION too!!  He has Multi Group and BIS wins.

Denetorn is the sire of the #1 Greyhound in Canada for 2014, BIS/BISS Can Ch Mandajors Highly Explosive At Windrock and also GCA National Specialty BOS winning Ch Mandajors Hot Off The Press At Windroc WE REGRET THAT WE NO LONGER HAVE SEMEN AVAILABLE FROM THIS OUTSTANDING SIRE>